Andreas Charalambides has established a reputation as the leading figurative painter of the Cypriot ‘generation of the 60’s’. He studied at the Royal College of Art under Sir Terry Frost, RA and has since developed a career of international standing, based in his native historical town of Paphos.

Andreas’ paintings are composed and executed with the skill of an old master, yet they are unmistakably modern. He has forged his own unique pictorial language, which is essentially steeped in the diachronic Mediterranean culture. The Italian 16th and the Dutch 17th century, the early works of Picasso and Modigliani, the Medieval frescoes and mosaics of Sienna and Paphos, and most of all the myths and legends of Hellenism are his main points of reference. His use of imagery and atmosphere bears an element of magic and archetypal metaphysical energy, and is articulated with frugal forms and a strict palette, where golds and browns are used to model and accentuate selected details and key figures.

He has had 19 solo exhibitions and more than 20 group exhibitions in Athens, Nicosia and London (Gallery K); Alexandria, Beirut, Baghdad, Kuwait and New Delhi; Amsterdam, New York and Oxford.

Andreas Charalambides was born in Paphos in 1939. He studied painting in Greece and in Britain. He co-operated with Stases Paraskos to establish the Cyprus summer School and Cyprus College of Art. In 1975 he was awarded a British Council scholarship to study British Art.

Benedict Read wrote about his work: “The work of Andreas Charalambides is certainly of the present, yet it is also timeless and resonant of the past. ….A suggestiveness, a sense of mystery pervades Andrea’s work, many paintings insistently maintain their detachment, much as the icons and mural paintings of medieval Cyprus remain relentlessly seeking to impose a sense of awe. Similarly the presence of shadows, the darker tones, apart from a universal psychic relevance or a reference to that present day political threat mentioned before, these passages of the dark evoke the enclosed, tenebrous majest of that original physical environment where one should truly view Byzantine church art in its genuine context, while the glowing colours, fretted in gold, of the icon may be the distant inspiration for the golds and translucencies of certain Charalambides paintings”

And Mary Rose Beaumont wrote in her latest catalogue: “The paintings of Andreas Charalambides are wonderfully intriguing. They are composed and executed with the skill of an Old Master yet they are unmistakably modern. On the one hand they contain within themselves the calm serenity of Pompeian frescoes and on the other hand they are resonant with the golden beauty of Early Renaissance altarpieces, yet they are painted in the full knowledge of the revolutions in art that have occurred in the twentieth century. Charalambides has forged his own unique language, a language which is essentially that of an artist steeped in Mediterranean culture, both ancient and modern, and in particular the myths and legends of his native land. The timeless quality which informs them is the heritage of classical antiquity.” 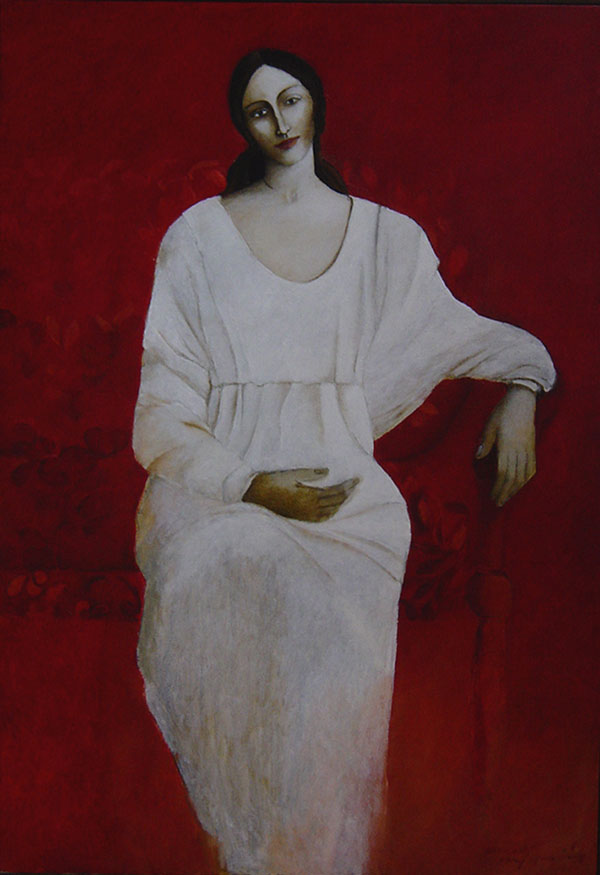