8 June 1924 – Christoforos Savva was born in Marathovounos village, on the Mesaoria plane. He only attended primary school, and then followed his family’s farming activities.

1947 – He took advantage of the immigration opportunities offered to army veterans, and left for England. Initially, he took classes at St. Martin’s School of Art and at Central School of Art, in London.

1954 – His first exhibition in Cyprus, followed by at least seventeen more solo shows, as well as by participation in several group ones.

June 1956 – Savva left for Paris, where he began a new period of studies, at the Académie Montparnasse of André Lhote.

Summer, 1956 – He travelled to the south of France and to Geneva. 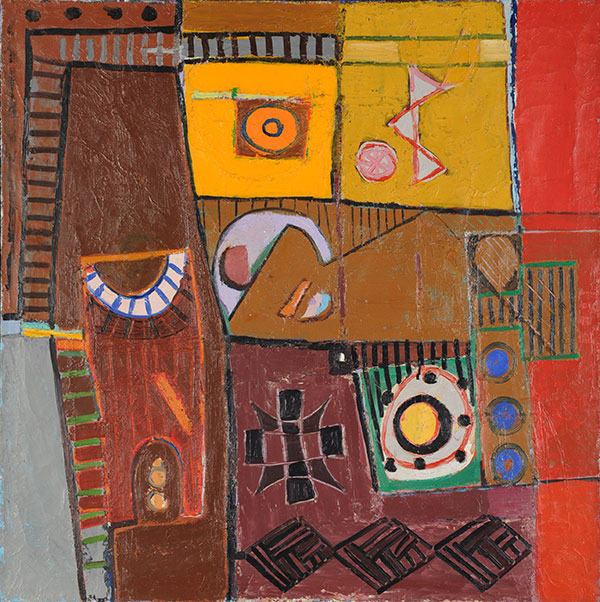 Summer, 1958 – Savva travelled again to southern France; at the same period, he participated at an exhibition at the Mariac Gallery in Paris.

May 1959 – He took part in another exhibition in Paris, with a group of young artists.

Summer, 1959 – He returned permanently to Cyprus.

May 1960 – Christoforos Savva and Welsh artist Glyn Hughes established the Apophasis [Decision] Gallery, which became the epicentre of cultural activity, in the first half of the 1960s.

December 1960 – He had an exhibition in Beirut (under the auspices of UNESCO), together with Hughes and French artist Simone Burdeau.

November 1962 – He took part in the “Art Today” exhibition at London’s Commonwealth Institute, along with Adamantios Diamantis, George Pol. Georghiou and A. Mentesh.

1967 – One of his works was included at an auction in New York, which aimed at raising money for the establishment of a peace centre in Bellapais.

May 1968 – He held his last individual exhibition (put together as a retrospective), at the Goethe Institute in Nicosia.

June 1968 – He represented Cyprus (along with five other artists), at the 34th Venice Biennale.

Since 1969, there have been several exhibitions of his work, including three retrospectives (in 1988, 1993 and 2008) in Nicosia. Several of his works are in many public and private collections in Cyprus, Greece, the UK, other European countries and the USA.