Dimosthenous born in Nicosia in 1996, wears many creative hats. He is an artist, a painter, and a sculptor, and has also dabbled in directing and cinematography. He graduated with a degree in Fine Arts from the University for the Creative Arts in Canterbury in 2019 and holds an MA (Distinction) in Theater Arts from Middlesex University. He also has a Cinematography Certificate from London Film Academy.

Artist Statement
When I first started painting, I experimented with surrealism art. I was trying to create paintings using my subconscious and wanted to depict symbolism in human psychology. I wanted my work to be perceived in different ways according to the audience’s psychology and views. I slowly transitioned to more emotional and cinematic/theatrical paintings. I incorporated many of the elements of surrealist paintings, such as the use of the subconscious and psychology, into the newer style of paintings that I created. This style has elements of tenebrism, as well as impressionism. I want to portray emotions through the story that is slowly unfolding on the canvas as well as from the characters’ body language and facial expressions. Some of those paintings explore my interpretation of stories from Greek mythology, but I have added my own twist. The other element that my work explores is the dark side of humanity and war. All the paintings have a double narrative and symbolize contemporary subjects.

In my work, I explore many dark themes about human nature and duality, as well as many of my personal fears and anxieties.

One of the main subjects of my paintings is war and I show the cruelty and the dehumanization and especially the horror. I believe the dark element of war comes from my passion for studying history, most of which unfortunately is about war and violence.

Another topic I explore is Greek Mythology, but the way I incorporate this into my work is by featuring Greek myths while exploring more contemporary issues or anxieties of modern society. But regardless of the subject, my work features the same or similar themes. I want my work to target people’s emotions and make them question many of their beliefs and life choices.

My inspiration for my art comes from many different artists and styles of art, not just painters. I read a lot of books, go to galleries and theatre plays, watch a lot of films, and listen to music. Some painters made a big impression on me, both on the visual side of my work as well as the symbolic side. They include Francisco Goya, Caravaggio, El Greco, Théodore Géricault, Leonardo da Vinci, Hieronymus Bosch, Vincent Van Gogh, Pablo Picasso, Frida Kahlo, Caspar David Friedrich, Edvard Munch, René Magritte, Mark Rothko, Edward Hopper, Salvador Dali, HR Giger and Johannes Vermeer. These painters have different art styles but the way they influenced my emotions inspired my work.

Many of my paintings have a cinematic structure and view, as a result of my love for cinema and theatre. Some film directors played a big role in the themes I explore and the way I work. Some of them are Stanley Kubrick, Alfred Hitchcock and Sergio Leone. The people in my paintings have very emotional expressions and body language that are influenced by theatre. Music is a big part of my inspiration in the early stages of developing my ideas, especially classical and instrumental music. Some musicians that inspire me are Ludwig van Beethoven, Wolfgang Amadeus Mozart, Johann Sebastian Bach, Frédéric Chopin, Antonio Vivaldi, Ennio Morricone, Bernard Herrmann, Hans Zimmer and John Williams.

Philosophy and psychology play a huge part in my work and the way I think. Carl Jung is one of my biggest influences in life and art. I use many of his theories in my work, especially the idea of duality and his theory of the shadow and the subconscious. Many of my paintings, especially the war paintings are inspired by real-life events, as well as vintage war photography. 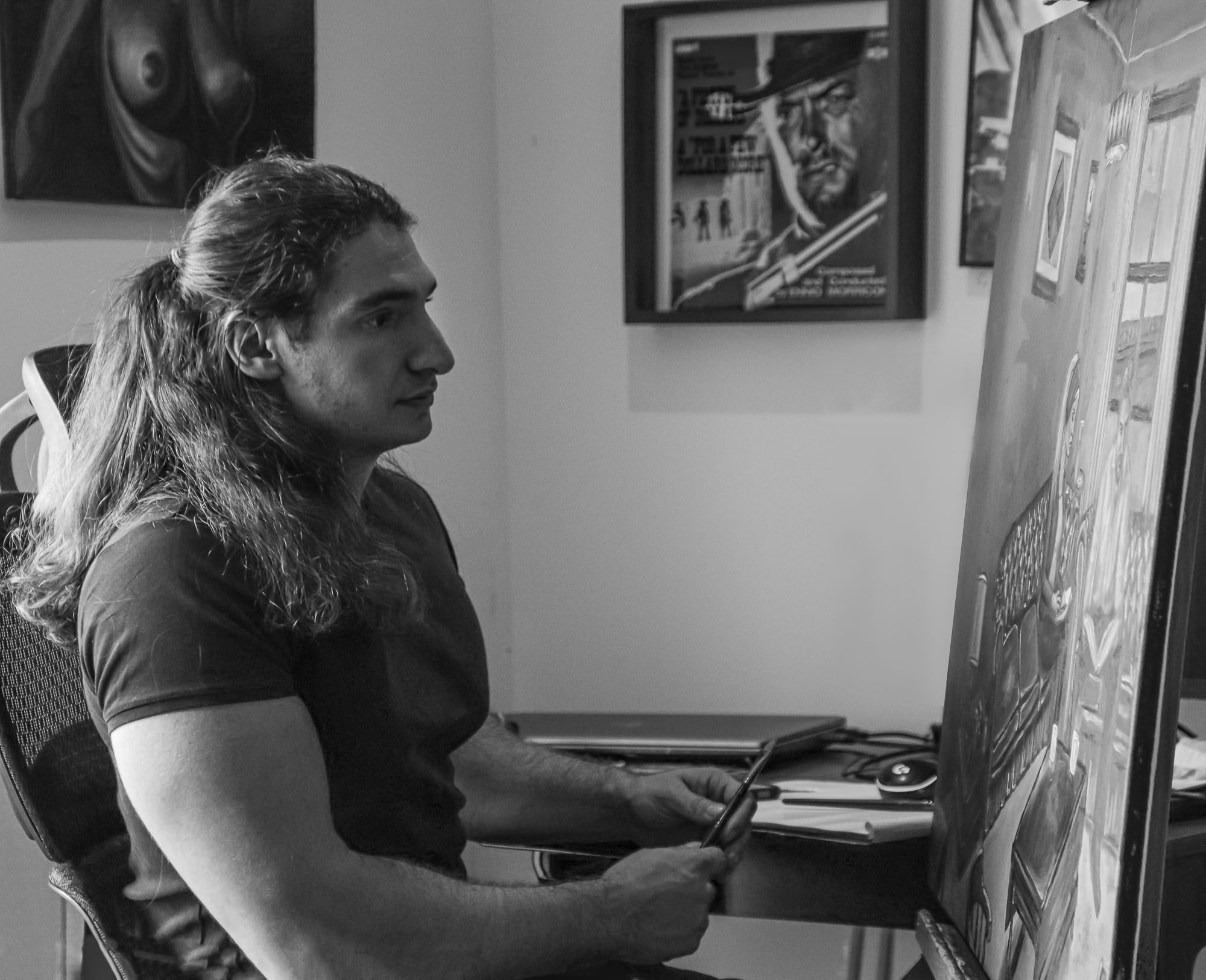