Samios was born in Athens in 1948. He studied in the Athens School of Fine Arts under Nikos Nicolaou and Yannis Moralis. His first two exhibitions were organised in the company of other artist friends in an abandoned car workshop and then outdoors somewhere in Varkiza- the second exhibition consisting of large scale sculpture. He spent the next six years working on the island of Aegina and those works were presented in his first individual exhibition at the Zoumboulakis Gallery. It was then that he undertook the commission to execute frescoes in the traditional manner in one of the three churches that he has painted outside Athens; he had been working religious icons since the age of sixteen. His affection for the neat drawing demanded by this art, is a long standing affair.

Samios then went on to live, work and exhibit in Paris, intermittently showing also in Athens and other Greek cities, Cannes and Tokyo. He now lives and works permanently in Greece at his homes in Athens and Aegina.

Pavlos Samios’ recent series of frescoes convey the marvellous methods used from time immemorial in order to bring in an inimitable fashion the essence and absolute power of colours in the unique transparency that is achieved over the long moment during which damp plaster dries into eternity. 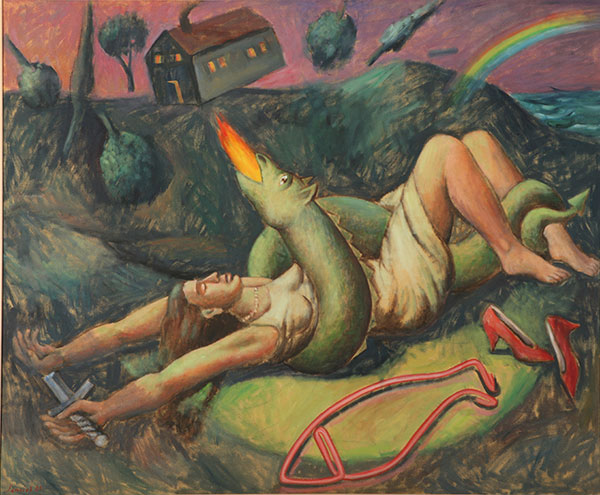