Vibrant is the word, which most clearly describes the works of Renos Loizou. Whether it be landscape or nude, his works are all – vibrant with colour, for he gets ” the whole day of colour into one canvas”.

Renos Loizou was born in Cyprus. He lives and works in his adoptive town of Cambridge, where he has permanent exhibitions in numerous Cambridge college collections, as well as at the famous Jim Ede Collection at Kettles Yard where he had a one man show in 1983 and he has frequently been exhibited at the Royal Academy.

It seems as though his landscapes are landscapes of the imagination – but Renos has contended that he starts with something concrete, then breaks it down into its constituent elements:” its essence and values”….”and shadows, originally negative may become positive when the original -say a mountain- gets lost…

“The landscapes are then reconstituted in such a way that most of the recognisable elements are still to be found in unexpected configurations. The impressions of the Mediterranean that remain in the memory are all there: white cubic houses, blackened gnarled trees, crescent moons, mountain shapes – are all worked in together. However, a careful reading of these innocent landscapes of the imagination – reveal much, much more.  The pictures, ultimately, are deeply sexual. Their erotic message is revealed by the artist both in the shapes of the elements used – for instance, the twin rounded mountain tops and also in the way the various shapes and colours are enclosed together in organic forms. ding his flock; more probable that he represents something altogether more sinister, reeking of decadence.

In his monumental nudes pose no such threat. Reminiscent of the nudes of Picasso and Matisse (Blue Nude, 1907), but essentially Loizou, they flow magnificently across the handmade paper as though they were landscapes themselves.  With confident economy of line, he manipulates perspective, making his solitary nudes seem about to burst out of the confines of their boundaries, leaving their vivid blue backgrounds behind. 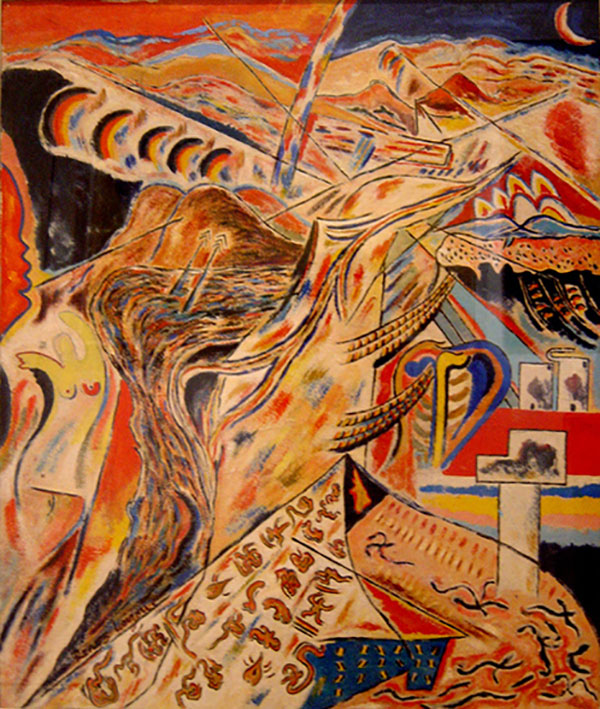