Zoe Zenghelis is an Athenian artist who has been living and working in London since her student years. After studying painting in Athens she continued her studies in stage design and painting at the Regent Street Polytechnic in London.

Zoe Zenghelis in 1972 together with Ram Koolhaas, Elia Zenghelis (architects) and Madelon Vriesendorp (painter) founded the Office of Metropolitan Architecture – OMA. The collaboration of the two architects with the two painters has widened their horizons and opened new opportunities for them in painting and architecture.

Since 1982, Zoe Zenghelis has been running the “Colour Workshop” at the Architectural Association, London. She is also a visiting professor at the U.C.L.A (University of California, Los Angeles) and the California State Polytechnic University and has been teaching at the Plymouth and Brighton Polytechnics as well as the Edindurgh University.

The artist’s previous preoccupations with OMA and current with the “Colour Workshop”, are evident in her painting. Marina Vazey writes: “Colour is a concern of crucial importance to architects and designers – yet, paradoxically, Zoe Zenghelis’ captivating paintings are orchestrations dominated by silvery cool blues and greys. Occasionally, there is a complementary pinky-orange, sometimes even a sharp yellow. But the basic tonality is cool: and these refreshing and deliberately restricted tones and hues describe and delineate her subject matter, extracted, quarried and imagined from a long involvement with art and architecture a huge range of colour is suggested almost by its absence, just as black and white photography can at times resonate with far greater subtlety than colour. Her paintings and watercolours exist brilliantly in the present by looking both to the past and the future. They cannot be read without a sense of the Mediterranean and the architecture of classic civilisation; a sense of the coastline is often present, in the suggestion of a horizon, a limitless sky. Yet the imagery is quintessentially modern and modernist: it is an imagery of the fragment, the collage, the assemblage, the parts standing for the whole, and often greater than the whole. Such suggestiveness, such coding, is a modernist idiom”.

Zoe Zenghelis is one of a handful of artists who has benefited from the architectural ideas and ideals of our time and at the same time reciprocated by offering her unparalleled sensitivity of form and colour.

Marina Vazey concludes: “In Zoe Zenghelis’ contained paintings, there is, again paradoxically, a suggestion of space stretching far beyond our perception, a celestial city, without limits. The eye is as absorbed by the space between the forms themselves, set into informal procession.

“But it is picture making beyond the stage, set somewhere between the contrived and the natural, the abstract and the representational. These imaginary spaces are inspired as much by the urban grid of London, the cities of concrete, as the islands of the Ionian Sea, their whiting gleaming houses bleached by light, the surrounding water both absorbing and reflecting the glittering sky. Space and territory, our own and others, is a question of politics and aesthetics. These paintings hint at imagination’s journey. As the poet E.E. 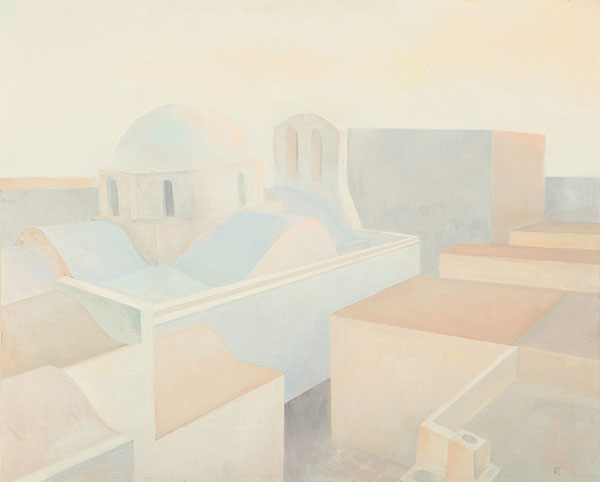